Tacos are one of my favorite weeknight staples, so I couldn’t wait to try “Tinga De Pollo (Shredded Chicken in Tomato Chipotle Sauce).”

Although, it can be enjoyed inside enchiladas or mounded over rice with beans, too, this homey, stewy, simple versatile chicken preparation just calls out for being tucked inside small corn tortillas for soft tacos.

This dish uses only two chicken breasts, which get poached. The two chicken breasts I bought weighed in at about 1.4 pounds, less than the 2 pounds that the separate poaching recipe originally called for. So, I cut that recipe in half as shown below. All this from just two chicken breasts.

After poaching, the flesh is shredded finely, resulting in a huge mound of chicken that you won’t believe.

Tinga De Pollo, as Cámara writes, was created to stretch the chicken to serve a lot of hungry mouths. As such, the shredded chicken gets mixed with a lot of thinly sliced onions to bulk up the mixture, and add greater texture and flavor.

An easy sauce of tomatoes, garlic, stock and chipotles gets blitzed in a blender to season it all.

These tacos were made for some of Cámara’s perfect guacamole, made with a spot-on balance of heat and acidity. My friends and I complain that finding perfect avocados is such an ordeal these days. Often, you cut into them and the flesh is gray-brown in so many spots. After discarding those bad bits, you sometimes end up with a lot less avocado than you anticipated. Camara recommends adding a dash of olive oil as a way of making up for that loss by adding a little extra fatty richness. Genius. The guacamole is best made right before serving. If you should against all odds have leftovers, squirt a little more lime juice on it , then press plastic wrap tightly onto the surface, which should help it from oxidizing when you refrigerate it to enjoy the next day.

Sink your teeth into these tacos that are every bit as fabulous as the ones you can’t get enough of at your favorite taqueria. You can practically taste just how wonderful this is jby simply ogling the photo.

6 Roma tomatoes, cored and cut in half

2 canned chipotles in adobo, plus more if desired

To make the Caldo de Pollo: In a large saucepan, combine onion, garlic, fennel, carrot, bay leaf, chicken, water, and salt to a boil over high heat. (Make sure you add enough water to cover the chicken breasts.) Decrease the heat and simmer for 20 minutes. Remove the chicken and let it cool. Reserve the stock. Once you can handle it, tear the meat off the bones and reserve it.

To make Tinga De Pollo: In the jar of a blender, combine the tomatoes, garlic, stock, chipotles, and 1 teaspoon of the salt, and liquefy.

Over high heat, warm the oil in a large heavy-bottom skillet or medium saucepan. Add the onions, making sure they sizzle when they hit the pan. You want them to cook at a high enough heat that they are frying and not caramelizing, so they retain a slight crunch rather than becoming soft and sweet. Add the remaining 1 teaspoon salt and cook until the onions are golden brown.

Pour the contents of the blender into the pan of onions and bring to a boil. Decrease the heat and simmer for 5 to 10 minutes, until the sauce has thickened. Add the chicken and cook briefly, just until the chicken has absorbed some of the sauce and heated through. Taste and add more salt if needed.

Tinga de pollo tastes great as a taco topping, an enchilada filling, or served on its own with rice and beans. It can be stored in a sealed container in the refrigerator for up to 5 days, and in fact, tastes even better reheated than when it’s first made.

4 avocados, cut in half and pitted

Juice of 1 or 2 limes, plus more as needed

1 serrano chile, stemmed, seeded, veins removed (or not, depending on how spicy you want this to be), and minced, plus more if desired

Spoon the avocado flesh into a medium bowl. With a fork, mash the avocado to the texture you prefer. (I like my guacamole a little lumpy.) Add the salt, lime juice, onion, tomato, chile, and cilantro. Drizzle in the oil and mix well. Then taste and add, just before serving, more lime juice, salt, chile, and oil, if needed.

Adapted from “My Mexico City Kitchen” by Gabriela Camara 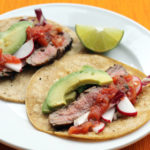 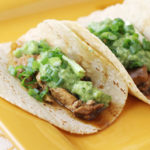 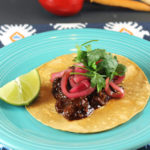 And: Lamb Adobo Taco with Spices and Orange by Tacolicious 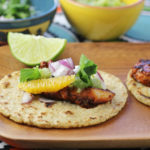