A stunning octopus dish at the new All Spice San Francisco.

Having enjoyed quite a few wonderful meals at the Michelin-starred All Spice, tucked inside a charming Victorian house in San Mateo, I was intrigued to see what Chef-Owner Sachin Chopra and his wife, Shoshana Wolff, had in store when they took over the legendary Masa’s spot in San Francisco last year.

When I learned it would be called Game, and specialize in wild game, I admit I was surprised. Not because Chopra doesn’t have the talent to pull off such a radically different turn, but because I feared it would be a hard sell among Bay Area diners who worship at the altar of local and sustainable, rather than exotica flown in from all parts of the world.

Game was intended to be playful and energetic with its surreal paintings of animals in costumes. But having visited as a guest of the restaurant when it first opened, the vibe was actually quite formal feeling with a white-jacketed host and a hushed environment. When you have a menu featuring turtle, venison, boar and a load of other meat, the place almost cries out for a bodacious dose of bold and brash — kind of along the lines of what Chef Chris Cosentino created at Cockscomb in San Francisco.

Chopra and Wolff rolled the dice with Game, but didn’t end up with a winner. However, they were smart enough to re-evaluate after a few short months. The result is the transformation of Game into All Spice San Francisco.

It’s not an exact replica of the San Mateo restaurant, though a few items are on both menus. While you’ll find squab and wild boar on the current menu, the flavors are more in tune with what Chopra does in San Mateo, taking his classic French techniques and marrying them with unique global flavor combinations. The deer painting still stands sentry over the bar. The dining room has a warmer feel now.

The animal paintings in the San Francisco location have been toned down, though, my favorite deer at attention in uniform still remains a striking presence over the bar. The heavy chairs have been swamped out for spindle ones, creating a warmer, more casual feel.

I had a chance to try the menu recently, when I was invited in as a guest of the restaurant on a Tuesday night.

The restaurant bakes its own levain — and quite well, too. The hearty bread comes with soft butter garnished with candied orange peel and lovely pea shoot flowers. 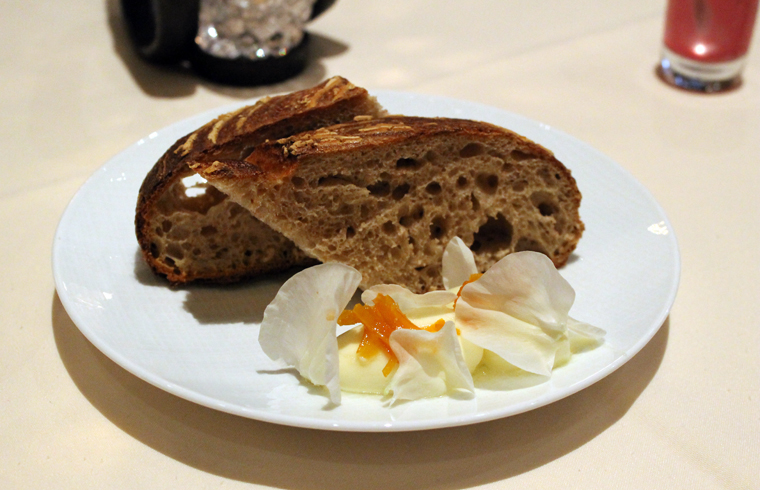 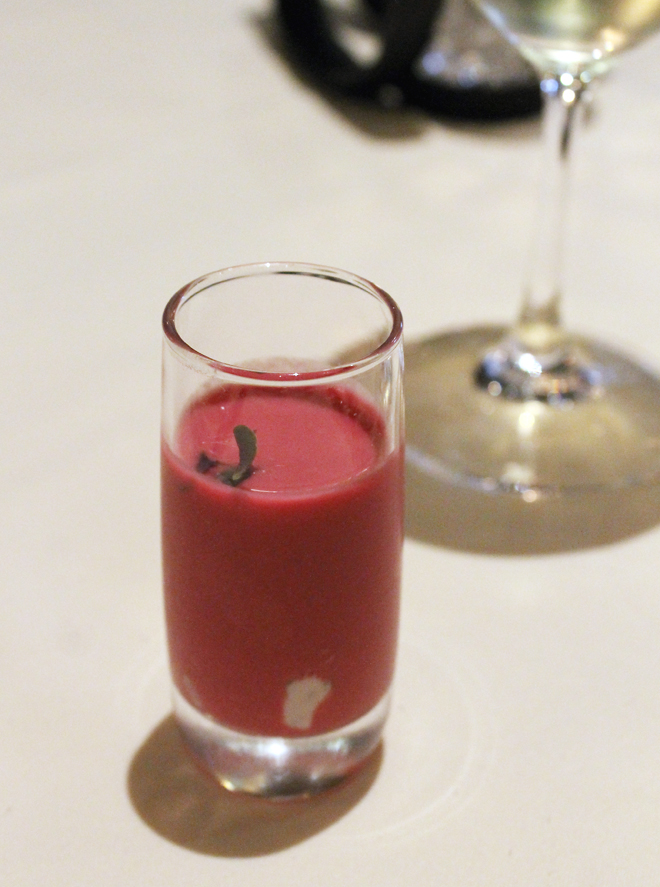 The amuse that evening was a shot glass of fennel-apple borscht. Its deep magenta color was definitely pretty in pink. Tiny diced apples and a swipe of tangy goat cheese lay hidden at the bottom. It set the tone for the meal to come, as Chopra has always had a way with beautiful presentations.

A chef’s tasting menu is available at $100 per person. My dining companion, my good friend Ben of FocusSnapEat, and I decided to order off the a la carte menu so we could try more dishes.

His appetizer of Octopus a la Plancha ($21) was one of the prettiest of the night. Tender yet meaty slices of octopus were smoky with warm paprika spices. A hummus-like smoked garbanzo bean mash was hidden underneath. Citrus segments added brightness. Plums, strawberries and tomatoes added sweetness and acidity, though, maybe the amount of the fruit took away a bit from the star of the dish, the octopus. A trio of different artichokes.

My “Artichoke, Artichoke, Artichoke” ($17) looked like a garden napped in creamy greenness. Mediterranean artichoke hearts were joined by Jerusalem artichokes and Chinese artichokes, also known as crosnes. Small mounds of cold mashed Peruvian-style potato salad lay underneath. The creamy sauce was an herbaceous, earthy, spiced vinaigrette. It was a dish that spoke of spring. It was also fun comparing and contrasting the soft Mediterranean hearts with the sweetness and nuttiness of the sunchokes, and the crunch of the crosnes.

Chopra sent out his “Gentrified Ramen” from the tasting menu for us to try. It’s a clever use of all the pork broth he has left over from making his maple-glazed pig ear salad offered in the appetizers section of the menu. 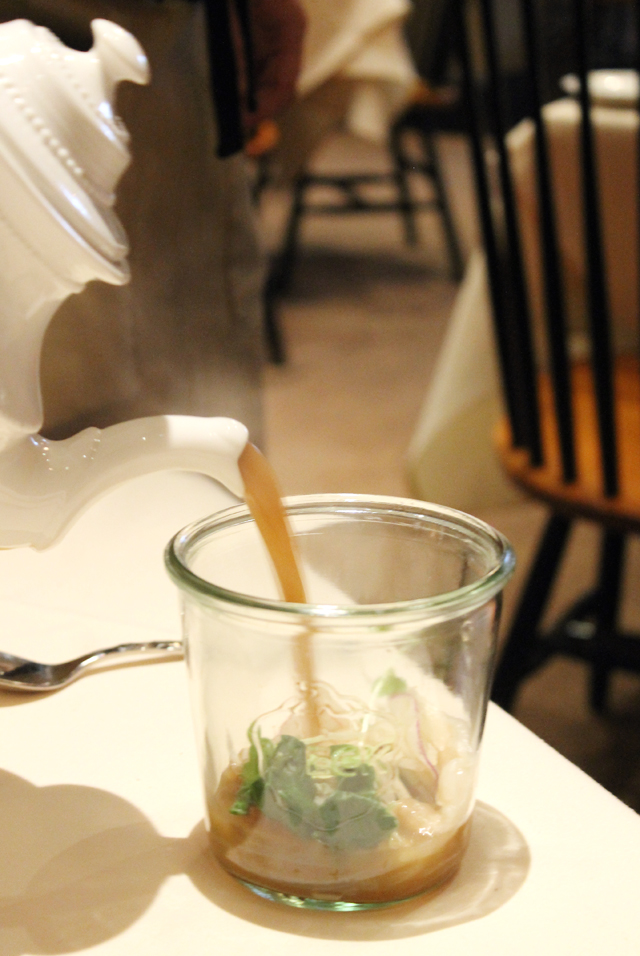 A spot prawn hidden inside.

A server arrived at the table bearing a glass canning jar filled with glass noodles, daikon “noodles,” and a raw Louisiana spot prawn. He poured in the pork broth, put the lid on, and advised to let it all steep for a minute or two before digging in. The broth is plenty porky with a back-note of possibly black vinegar, which helps balance the richness. The two types of “noodles” add interest, as you’re never sure if you’ll end up with soft or crunchy ones with each mouthful. The spot prawn was quite soft, maybe too soft, but it could be that we didn’t allow enough time for it too cook in the broth. In a dish like this, it’s hard to tell how long is long enough when you’re left to your own devices.

Ben’s lacquered squab ($36) was cooked perfectly — rosy in the center, yet not overly rare. A cylinder of sweet, silky corn pudding ran down the center of the plate. Lodi cherries are a natural with birds like this, adding just enough fruity sweetness. With each dip of the fork in this dish, you keep uncovering other garnishes, including preserved figs, morels and a chocolate-olive paste. 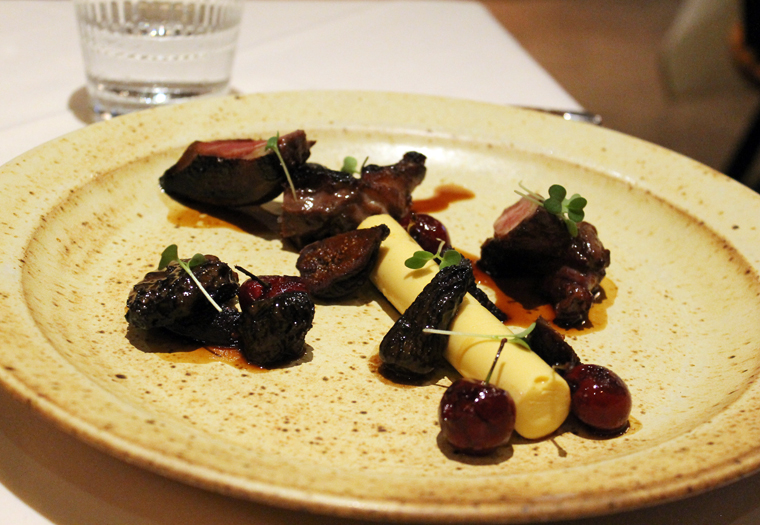 Seabass in an unusual and tasty broth.

My pan-seared seabass ($36) arrived crisp and golden in a deep bowl that also held pickled onions and crisp kale leaves. At the table, a server poured over it all a miso-tomato-truffle broth full of earthy, tangy, umami flavors. It’s a light dish with punch.

For dessert, our server suggested the dark chocolate kulfi ($12), which was a fine recommendation. A tandoori-spiced macadamia nut brittle base as chewy-crunchy as a gourmet Twix bar formed the foundation with rich dark chocolate. The top was draped artfully with a ribbon of chili-lime-dusted fresh mango. Alongside was a quenelle of mango kulfi. The fruit was a refreshing ending, yet the chocolate and the spices made it just indulgent enough. 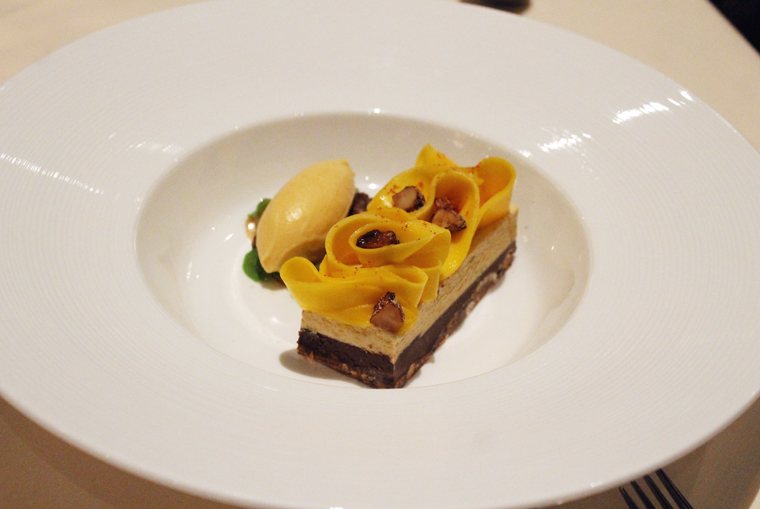 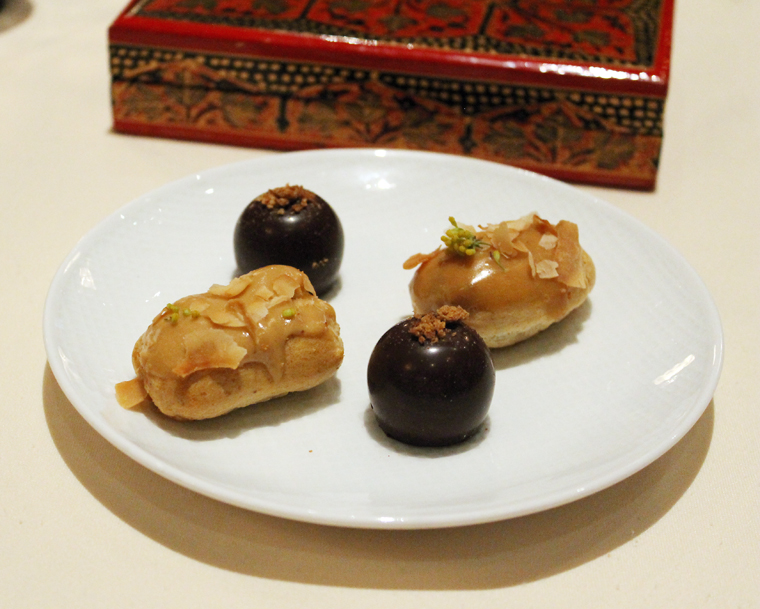 The night ends with a little plate of tiny sweets: Thai tea truffles with a wonderfully pronounced tea flavor, and toasted coconut eclairs.

All Spice San Francisco has all the makings to do as well as the original San Mateo one. Here’s hoping the odds are in its favor this time around. 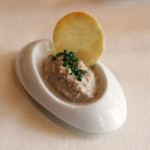 More: A Visit to All Spice San Mateo 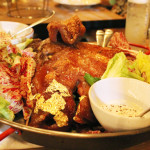 And: A Visit to Cockscomb in San Francisco