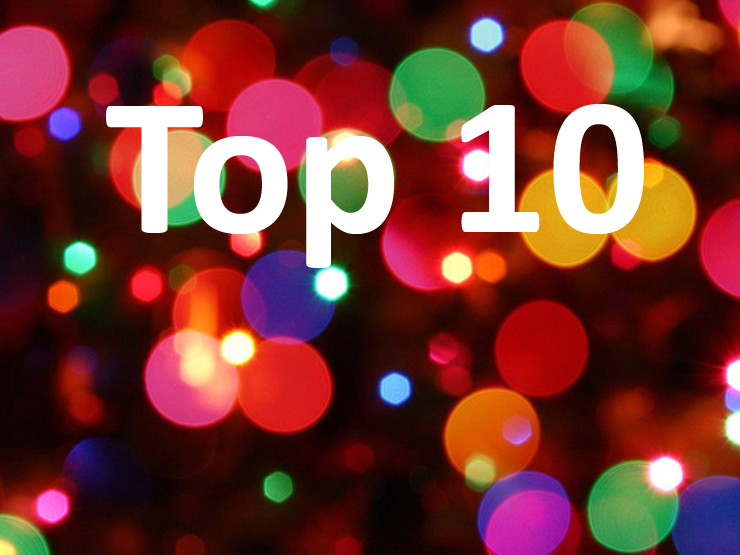 What a year in food.

It’s never easy narrowing down so many meals to just the few dishes I can’t stop thinking about, and could eat again and again.

Here are my Top 10 eats of the year, in no particular order. Cheers to all the chefs who work so hard to make our lives so delicious. 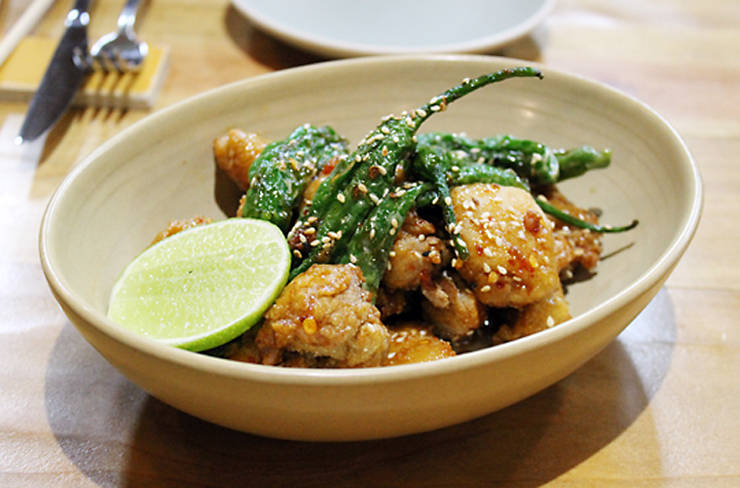 It never leaves the menu — for good reason. I so hope one day I can enjoy these once again.

2. Buttermilk Fried Chicken Buns ($4 each) at the now-shuttered Hapa Ramen in San Francisco. I had these only once. And unfortunately, I may never have them again. One of the more sordid tales this year was the unfortunate demise of this spirited, fun little Mission District spot when Chef Richie Nakano was ousted after a bitter disagreement with his moneyed, tech investor. The losers in all of this? The chef who spent years building this concept from pop-up to (what he thought was) permanent. And the diners, who no longer have a chance to indulge in these pillowy steamed buns nestling Southern-fried chicken with house-made pickles and chili-spiked mayo. Sublime — while it lasted. 3. Pig’s Head ($69) at Cockscomb in San Francisco. It’s carnal and it’s primal. And you have to have it at least once. Brined, braised and roasted, this Berkshire half pig’s head is one of Chef Chris Cosentino’s most-ordered dishes. The skin is like chicharron armor — even a knife has trouble penetrating it. The flesh is fatty rich like pork confit. It’s huge — and a couple people will hardly put a dent into it. But you won’t regret it. A heavenly trio of pastas.

4. Any pasta at La Balena in Carmel-by-the-Sea. Every city — every neighborhood — should be so lucky as to have an Italian restaurant like this. Charming, warm, and inviting, with food that’s not too precious, just flat-out fabulous. You can’t go wrong with any pasta dish here. Most of the noodles are made in-house, too. This sampler trio is not listed on the menu, but if you ask nicely, and the restaurant is not too slammed, you might be be able to partake. Mine consisted of pappardelle with duck ragu; tagliatelle with lamb ragu and olives; and ricotta gnocchi with wild mushrooms, kale, truffle oil, and bread crumbs. I don’t get to Carmel that often. But I would gladly take a seat here every time I go. I dream about these.

5. Kouign-Amann ($3.75) at Howie’s Artisan Pizza in Redwood City. Yes, Howard Bulka’s pizza place that makes impeccable French pastries. Weekend brunch here is one of the best kept secrets on the Peninsula, thanks to Chef John Shelsta. This is a man who is trained in the savory and the sweet, and takes his pastries very seriously. His croissants are so precisely rolled, your eyes grow wide staring at them. And the kougin-amanns, those amazing pastries that are like croissants folded onto themselves with sugar syrup baked into the crackly, crisp layers? They are beyond reproach. Shelsta studied with the queen of the kougin-amanns, Pastry Chef Belinda Leong of B. Pastisserie in San Francisco. It shows, as they are as perfect as hers. And that’s saying something. Come for the wonderful, chewy-crisp pizzas, but don’t forget to try brunch. The kouign-amanns are not always available each weekend, as they are so laborious to make. But it is worth every effort to seek them out. 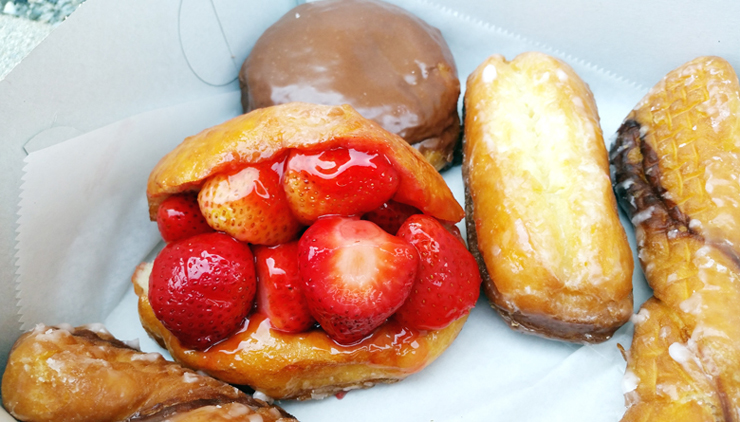 Feast your eyes on the famed strawberry donut.

6. Fresh Strawberry Stuffed Donut ($4) at The Donut Man in Glendora. Someone once joked on Facebook that this walk-up donut kiosk in the middle of a parking lot is the only reason to trek to Glendora. I dunno about that, but I will admit that’s the only reason my husband and I ever brave Los Angeles traffic to go here. Time it right to fresh berry season (usually starting in spring), and you will be richly rewarded with this fresh brioche donut split in half, and stuffed to the gills with lightly glazed, fresh, whole, sweet strawberries. It’s a meal. One of the most recognizable desserts in San Francisco.

7. Baked Hawaii ($10) at Liholiho Yacht Club in San Francisco. There is a reason why this dessert is ordered by almost everyone who dines here and splashed over all social media. It’s stunning to look at, and even more fun to eat. With a butter cookie platform supporting spongecake and a mound of pineapple ice cream that’s swirled all over with a beehive of torched meringue, it’s a playful take on an old-school dessert you rarely even see any more. Kudos to Liholiho for reinventing it for a new generation to adore. A rare fish at a rarefied experience.

8. Akamatsu at Omakase in San Francisco. It’s hard to imagine there’s a fish even more expensive than the practically endangered blue fin. But Akamatsu — also known as white tuna, black throat sea perch or even “white toro” — is such a creature. At Omakase, you put yourself in the restaurant’s hands, choosing either a $150 or a $200 tasting menu, then letting the chef prepare what’s best. The Akamatsu, a lush, sweet fish, is lightly torched before being served, leaving it with a delicious whisper of smoke. Like all the fish at this restaurant, it’s handled preciously and expertly. Not your average bird.

9. Family-Style Roast Chicken ($75) at Mourad in San Francisco. You might balk at paying $75 for a roast chicken, but hear me out on this. First off, on the menu, it says it serves two. Really, it can serve four easily. Moreover, it comes with three sauces, plus four side dishes, including the most ethereal couscous you’ve ever had that’s flavored with decadent brown butter. As for the chicken itself? It’s brined in olives and preserved lemons, then roasted until the skin is a burnished mahogany. It’s juicy as can be. You might be skeptical, but one bite will make you a believer. Giant shrimp cooked at the table on heated granite.

10. Kauai Shrimp at Trokay in Truckee. You don’t expect to find a fine-dining gem like this in a little ski town. But Trokay is full of surprises. The vibe is relaxed; the food is high concept. Hawaiian shrimp do a star turn on the $145 chef’s tasting menu. A chef marches to your table carefully holding a slab of granite from Lake Tahoe Basin that’s been heated to more than 1,200 degrees. The shrimp sizzle away until they turn coral colored and crisp on the outside. Then, one is set before you with an array of tiny garnishes: pickled ramps, nori dust, miso and crunchy popped rice. Never before have you savored one shrimp so much. 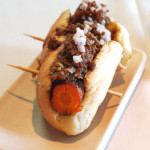