As we near the end of one year and ready for the start of a brand new one, allow me to toast my favorite dishes of 2014.

It’s never easy to narrow the list to just 10. But these are the tastes that lingered the most; the ones I’d want to eat all over again in a heartbeat.

Here’s my Top 10, listed in no particular order. I raise a glass from a lovely sample bottle of Sokol Blosser Evolution Sparkling, a blend of nine white wines, which give this method champenoise bubbly the complex flavor of apple, pear, peach and lemon. Here’s to all the chefs and restaurants that made 2014 so delicious and delightful. 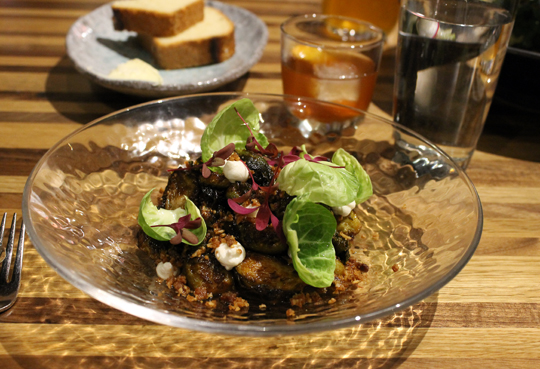 This will make you even more of a fan of Brussels sprouts.

1) Brussels Sprouts ($12) at The Lexington House in Los Gatos. I know, I know — lots of places do Brussels sprouts these days. And some do it exceedingly well. Even so, the version here is really one of the best. What sets it apart is its mix of textures. Most of the leaves are charred to bring out their caramelized sweetness. But some single leaves are left raw to lend added crunch and freshness. Of course, there’s smoked bacon. But there’s also Greek yogurt and local honey, giving the dish a voluptuousness you sure don’t expect with Brussels sprouts. 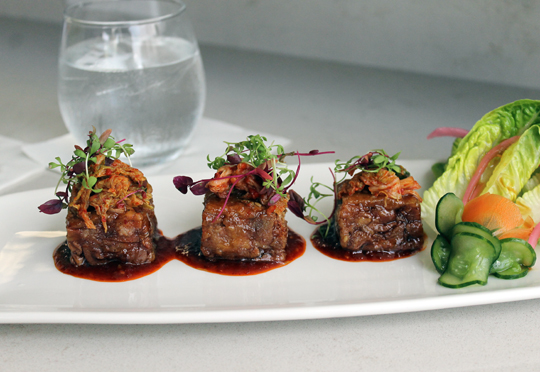 Yes, this is fried chicken.

2) Fried Chicken ($12) at MW Restaurant in Honolulu, Hawaii. OK, you will have to get on a plane to get this dish. But chances are you’ve never had fried chicken like this. We’re not talking unwieldly large drumsticks and wings you have to eat with your hands, but neat, little cubes — almost like tiny fried chicken presents all wrapped up into something new and exciting. If you’ve ever had Chinese pressed duck, this fried chicken is reminiscent of that classic dish. Jidori chicken is poached, then pressed into squares, before being fried to a crisp. They’re glazed generously with a sticky sauce that’s sweet, spicy and garlicky. This is fried chicken you eat with a fork — all the while with a big smile on your face. 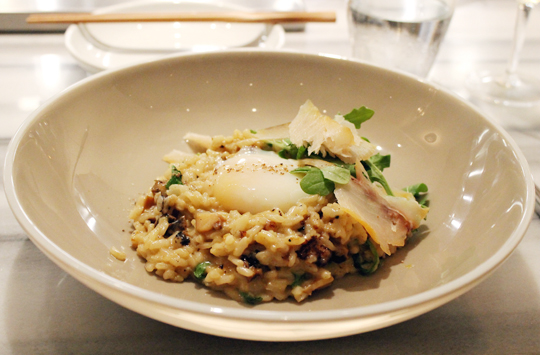 Abalone risotto — one of Ka’ana Kitchen’s most popular dishes, deservedly so.

3) Abalone Risotto ($31) at Ka’ana Kitchen in Maui. Heck, if you’re already in Oahu, might as well hop over to Maui for this amazing dish. Think risotto — but done with Asian flavors instead of Italian ones. The creamy rice is cooked with miso broth. Diced abalone get spooned in. Slivers of Kona Kampachi “bacon” garnish the top, along with a perfect jiggly 62-degree egg. Break the yolk and stir away to add even more luxuriousness to this dish that boats a big umami punch of the sea. I shared this dish with my husband. But I could have easily hoarded every bite to myself. That’s how spectacular it was. 4) Smoked Duck Wings ($14) at Verbena in San Francisco. I distinctly remember ordering these with low expectations, having had my share of tough duck wings that were more jaw exercise than eating pleasure. From the first bite, these put all those others to shame. Imagine Buffalo wings by way of Singapore. These wings are brined, roasted, smoked, then fried. The result is the most tender duck wings ever. Add a cherry hot sauce with the pleasing funk of fish sauce and you have the makings of a finger-licking good dish you won’t soon forget. 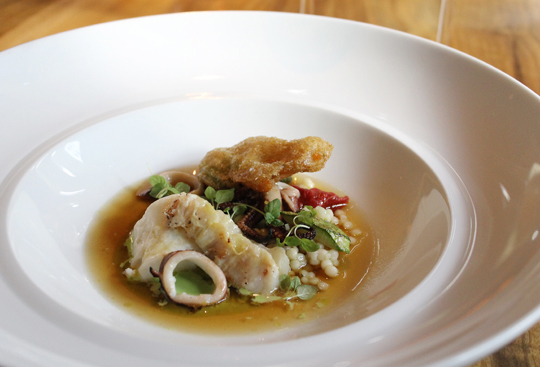 Seafood in a charred pineapple dashi you won’t soon forget.

5) Matsugawa with Engawa and Monterey Bay Squid at Parallel 37 in San Francisco. Four Charlie Trotter alums now head this illustrious restaurant in the Ritz-Carlton. Every time I dine there, too, Chef Michael Rotondo never ceases to make me sit up and take notice with his creative cooking. This last time it was with this dish of Matsugawa (stone flounder) with Engawa (halibut fin) and squid — all on a foundation of pearl couscous. The seafood was sublime, but what really made this dish sing was the ingenious charred pineapple dashi. I finished every drop of this deceptively thin broth that carried a wallop of smoky umami softened ever so by a bracing fruitiness. 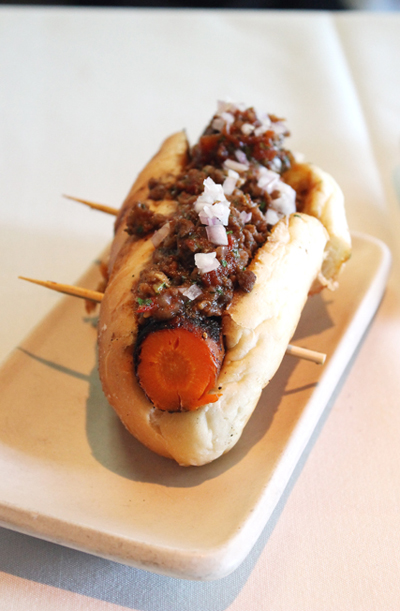 Too much fun in a bun!

6) Carrot “Hot Dog’‘ ($12) at Press in St. Helena. Executive Chef Trevor Kunk knows his way around vegetables, having cooked at Blue Hill in New York for seven years. He also has a playful sense of humor, as evidenced by this dish that can’t help but make you chuckle. It looks like a hot dog. But it’s actually a whole carrot propped up inside a grilled bun. It eats like a hot dog, too, because of the goat chili ladled on top. It’s a meaty bite with the caramelized carrot adding an almost ketchup-like note of sweetness. It’s a fun nosh from a chef with serious chops. 7) Spaghetti Vongole at Nathan Myhrvold’s Modernist Cuisine Laboratory in Seattle. I admit it will be near impossible to get this dish ever again. I figure just getting one shot in a lifetime to dine at one of these invitation-only dinners is a miracle in and of itself. Nathan Myhrovold, of course, is the former chief technology officer of Microsoft, who plowed his earned millions into building a laboratory that does all manner of cutting-edge research, including that of molecular gastronomy. I was lucky enough to join 21 of the country’s top female chefs in attendance at this memorable 6-hour, 35-course dinner. I am a sucker for linguine vongole. His version swapped out noodles made with flour for those made out of geoduck. Walnut marmalade and miso powder added a extra nuttiness and brininess. The “noodles” had a springy, toothsome quality. It all added up to a vongole for the ages. Duck-dashi consomme you’ll want to slurp up to the very last drop.

8) Seared Fois Gras with Seaweed, Radish and Duck-Dashi Consomme at La Toque in Napa. Again, it won’t be easy to get this dish again. At least in its entirety. That’s because foie gras is banned in California. And I only managed to enjoy this dish because La Toque was brave enough to host a “State of American Foie Gras” lunch to publicize that it’s now been two years since the law took effect that makes it a crime to produce or sell foie gras in this state. The lunch featured six chefs cooking six courses, each of them featuring foie gras. The lunch was free — to meet the letter of the law. Guests won free seats in a contest. You know a broth is something extraordinary when everyone at your table takes a spoonful, then starts wondering if they can sneak back into the kitchen to devour any that’s left in the pot. This dish was the creation of Chef Mark Dommen of One Market in San Francisco. You won’t see this exact dish on the menu there, not as long as foie gras is illegal. But Dommen does spotlight the consomme sometimes in other dishes. If you ever spy it at One Market, it is a must-order. A vegetarian soup that soars.

9) Celery Root Soup with Brown Butter-Coffee Glaze ($7) at Zola in Palo Alto. If this soup was a pair of shoes on the sale rack, you might just walk on by. Kind of plain looking, maybe a little too sensible in spirit. But oh, you would be missing out. Like that perfect pair of shoes, it fits like a glove, offering pure comfort and subtle style you grow to appreciate. Chef Guillaume Bienaime features a vegetarian soup nightly. This one is not to be missed. Celery root gets pureed until smooth. Its nutty flavor is taken to new heights with the even nuttier brown butter glaze that has the surprising bitter-earthiness of coffee, which thoroughly transforms this humble root veg. 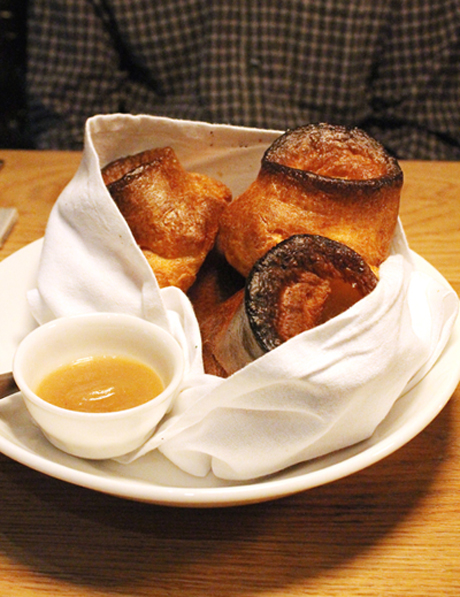 10) Popovers ($9) at The Farmer and The Fox in St. Helena. It may sound like hyperbole to call these the best popovers in the world. But I dare you to find ones that are better. In short, these are to die for. As flaky and buttery as croissants, and so poofy high and light you think someone injected them with helium. Baked to order and arriving at your table right out of the oven, they come with a crock of apple-ginger butter to slather away with. I practically had an out of body experience eating these. While my waistline is probably grateful these popovers are such a trek to get, my hearty appetite curses the fact that St. Helena isn’t closer to where I live, as I’d happily tear into a basket of these every week. 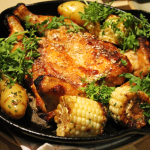 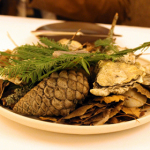 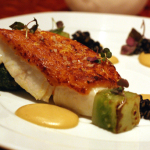 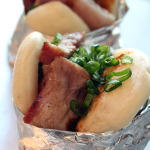 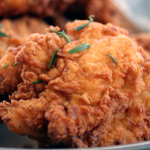